Skip to content
Latest news
A New Waxwork has joined the Collection in The National Wax Museum Plus!
Revealed | Albert Einstein waxwork added to the Science & Discovery Area
Philomena Lynott added to the Grand Hall of Fame
Philomena Lynott’s kind donation to the Museum & the beginning of the creation of her Waxwork

A New Waxwork has joined the Collection in The National Wax Museum Plus!

The figure of Mr. Pussy aka Alan Amsby wax launched in the National Wax Museum Plus on May 16th, 2022. Unveiled by the legend himself and the iconic Anne Doyle to a massive round of applause. The event was attended by big names on the Irish showbiz scene such as Rory O’Neill (Panti Bliss), Alan Hughes and Rory Cowan.

Alan has been a staple on the Irish entertainment scene since 1969, then he came here from London, and decided never to leave. He has paved the way for the thriving drag scene in Ireland and is an icon in the LGBTQ+ community. We are delighted to have him amongst our collection of wax celebrities.

“There is no way to properly describe the impact Alan and Mr. Pussy has had on Irish entertainment. He shocked some, he made us laugh until we were pained and he forced us all to grow up just a little. I am aware that I benefit enormously from the many taboos Alan erased and from the lonely furrow he ploughed  back then. Alan Amsby, you are very very special. Mrs Brown thanks you, my family thanks you and I thank you.”

“Sorry I can’t be there to see Alan’s statue. My liver cannot take any more nights out with him. It’s nice to have the statue, pity he can’t put it on his mantlepiece with his other awards. We were once banged up together in Kilmainham Jail. It wasn’t because we had been caught shoplifting in Brown Thomas  – we got away with that. We were there as we were employed to play two vicious killers in the Jim Sheridan movie in the name of the father. I was Rita Hindley and Alan was Stella Kirkin. The secret to Alan’s eternal youth has nothing to do with surgery or the laser machine he keeps in the back bedroom; it’s all down to healthy living. He wouldn’t dream of touching a drop of alcohol. It’s a full bottle or nothing. Long may he reign. Ireland is lucky to have him.

“Congrats on your waxing, all good wishes.”

Come and see our last waxwork! Book online and get a 5% discount!

See the full event on our YouTube channel: https://www.youtube.com/watch?v=3G1E8HqM9Xw

A New Waxwork has joined the Collection in The National Wax Museum Plus!

The figure of Mr. Pussy aka Alan Amsby wax launched in the National Wax Museum Plus on May 16th, 2022. Unveiled by the legend himself 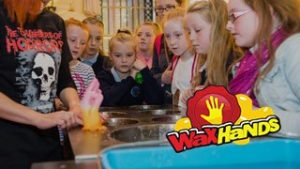 Wax Hands is a fun attraction at the National Wax Museum Plus. Located in the gift shop , Wax Hands give visitors a chance to

Click the button below the see offers that we reserved for you.